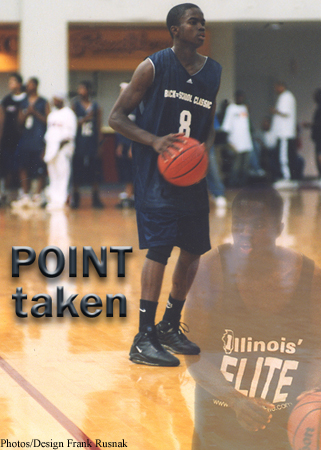 --12-17-04--
By Frank Rusnak
Whoever said point guards aren’t made they are born, well, Brandon Ewing has beef with you.

When the Wyoming recruit began his prep career he certainly wasn’t a lead guard, with his focus on scoring and not distributing.

The verbose Ewing began his prep career a bit shy and reserved. Coach Loren Jackson had one of the city’s finest teams and leading the way was eventual McDonald’s All-American point guard Sean Dockery.

“The biggest thing is, and people raise their eyebrows now when I say this, but it is talking,” said Ewing, who was mainly a three-point specialist coming off the bench in his first year. “When I was a freshman I had Sean so I didn’t really have to talk very much and I was pretty shy. But as I got older I became more talkative on the court. You know, playing with Sean Dockery, an all-American, you’re going to be kind of shy.”

The same influence that helped quiet Ewing made him elevate his vocal cords more in his sophomore campaign. Now a junior at Duke and the team’s starting point guard, Dockery sat down the then-freshman Ewing and told him about being a leader and the intricacies of the point guard position.

“Sean told me I must talk a lot and help my team out,” Ewing said. “He inspired me to be a point guard. And it’s my best position, especially at 6’1”.”

After Dockery’s departure to Durham, North Carolina, Ewing was left by himself with the Jaguars. Ewing tried to revert back to his more natural-feeling position of shooting guard, but Jackson helped make him realize his future was as a lead guard.

“He was kind of put on an island his second year and I made him play the point,” Jackson said. “He tried to run to the two [guard position] some, but I made him play the point because I figured if he didn’t grow anymore he’d have to be a point guard. As his junior year progressed I think he just got better and more comfortable. Now he’s doing a very good job of leading his team and picking his spots. He’s playing a well-balanced game.”

His balance is showing with averages of 23 points, six assists and six steals. All of that with a 5-1 record, with the Jaguars only loss coming to Von Steuben in the championship game of the Blue Cross Blue Shield Tip-off Classic. This year’s version of the Jaguars is the best Ewing has been on in his four seasons, he said.

As the season continues, Ewing has taken the responsibility of tutoring Julian’s youngest star, just as he was by Dockery.

“He’s doing a good job of helping Jeremiah Kelly,” said Jackson, of Julian’s sophomore sharp shooter, “who he’s mentoring like Sean did to him.”

When Ewing is done with his prep career he will have big shoes to fill at Wyoming. A senior at Wyoming, Chicago native Jason Straight “will go down as one of the finest players to ever wear a Wyoming uniform,” proclaims the Cowboys’ official Web site.

If you ask Jackson, it shouldn’t be a problem for Ewing to hold his own on the next level.

“I think Brandon is one of the best players in the state,” he said. “He’s been overlooked a lot because as a 6’1” guard he doesn’t have tremendous blow-by. But the thing is he knows how to use his body, he knows how to get to the rim, he knows how to protect the ball. And he’s a winner. He’s won.

“I don’t think there’s a better resume, in terms of point guards; three years going to three final fours and out of those three years he won a city championship and has two regional championships. The completion for him this year is winning a city and trying to win a state championship.”