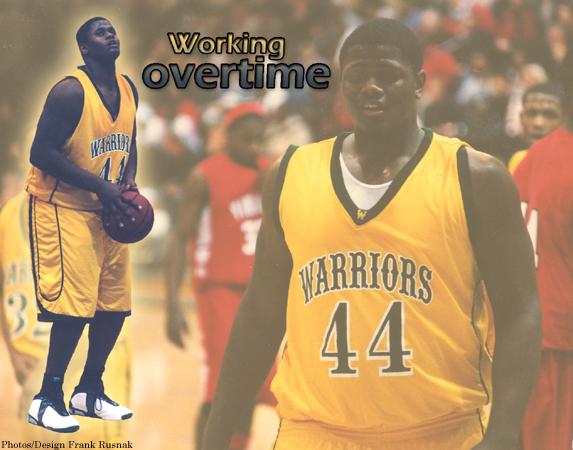 Last season Westinghouse and Simeon fought for the Chicago Public League title on the United Center floor. This year, the two teams will dual once again.

This time, Simeon won’t have its big three of Calvin Brock, Anthony Newell and Brandon Alexander. All three have graduated and gone on to play in college.

The only thing that has stayed the same is the stakes and Westinghouse’s big man in the middle, DeAndre Thomas.

The 6’7” 280-pound senior is now the city, and state’s, top post player and one of the most coveted unsigned seniors in the nation.

“I’ve basically gotten better at everything, especially my weight,” said Thomas, who weighed over 300 pounds earlier in his career. “I know when to eat and when not to.

“When I got back from [summer] camp, I told everyone on my team that I was going to get my weight down so I could run the floor better and be in the game with them so we could go ahead and try to go Downstate and win the City championship like we did last year.”

On the path for success, Thomas is averaging 20 points, 12 rebounds, four assists and three blocks for Westinghouse (24-3).

Rose and Flowers, two of the state’s top from the Class of 2007, won a city title last season on the sophomore level.

The ‘House walks into tonight’s rematch -- at 7 p.m. live on WCIU Channel 26 -- as the favorite with Thomas anchoring the middle.

“I’m still trying to mature as a captain so I can provide for my team,” said Thomas, who is considering Kansas, Illinois, Florida State and Miami.

While Thomas has lost his partner in crime, Ellis, he does have several new additions that are helping him get the job done this season.

Joe Ballard, Kris Harris and Marquis Johnson, all transfers from Proviso West, are all key contributors for Westinghouse.

Other Warriors guards that are key to their success include seniors Dante Lewis, Jimmy Hill, Corey Caston and twins Quincy and Quintin Crosby.

Despite Westinghouse’s traditional quick, pressing style of play and a roster that is dominated by senior guards, everyone knows Thomas is what makes this year’s team go.

“So far he’s the best big guy I’ve seen in the state and country,” Caston said. “He’s got a soft touch and on the block he can put it in the bucket.

“As a sophomore he didn’t push himself as much as he does now. He’s pushing himself more. He wants to win a state championship and he knows in order to do that he’s got to do that every day in practice.”