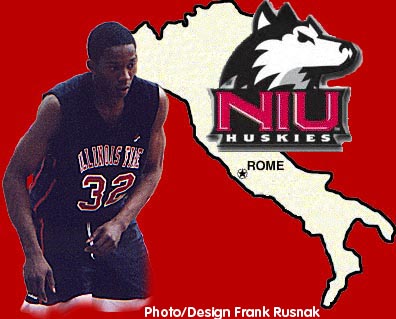 Named after Rome, Italy, his name is not the
only thing different about Curie's Rome Sanders

By Frank Rusnak
Out of nowhere, a tall lanky guy comes into your vision just as you release the ball. Swatting it back in the opposite direction you intended it to go, you barely know what happened. Then, as you turn around you see his team has just added a deuce in their scoring column with a rim-rattling dunk on the other end of the court.

When you find out that person hanging on the rim after his dunk is the one that had initially blocked the shot that started the whole thing, it is safe to assume that player is Curie's 6'7" Rome Sanders.

Sanders, who has recently committed to Northern Illinois University, still is very thin for a post player and isn't very familiar with putting the ball on the floor as a venue of getting to the basket, but his upside is one to be cherished.

"Rome has made tremendous strides as a basketball player and his best basketball is ahead of him," said Mike Oliver, Rome's high school coach. "Right now he is just learning the game. I think Rome is one of the top power forwards in Chicago. For his size he is a good shot blocker, runs the court well and is a good passer and he can step out and hit the midrange jumper."

Averaging 16 points, 8 rebounds and 3 blocks last year, Rome made a name for himself in recruiting circles at the beginning of last year while leading the Condors out of the blocks to a 13-0 start.

Remaining in the powerful Red West, Rome will have to come full-force once again for his senior year, if he hopes to help redeem Curie after faltering and losing nine of their last 11 games.

"It was very disappointing how we finished off the season last year," said Rome, "because we started off real good and we thought we had a chance to win city. But this year, I think we've got a good chance to do better. I think the Red West is wide open so we have a good chance for the title."

With all but one starter back, Curie is in a good position to make some noise in the Chicago Red West Conference. The increased play of Rome is what will be the key factor for the Condors, though.

A starter on varsity since his sophomore year, Rome has been working on elevating his play to help out the team.

"Every day after conditioning I hit the weight room to try to get bigger," said the slender Rome, who tips the scales at 190-pounds soaking wet.

That extra size will be needed when he heads to NIU.

"I was being recruited by a lot of out of state schools, but I just wanted to stay close to home," Rome said. "They have a lot of younger guys there, but I think I'll mix in well with them."

Setting personal goals for himself to make the all-area team and one of three teams for the all-state squad, Rome has a lot of work in front of him. But with his passion and dedication to the game, best exemplified by the tattoo on his arm that reads, "For the love of the game," he will be ready to face the obstacles that await him in his future.