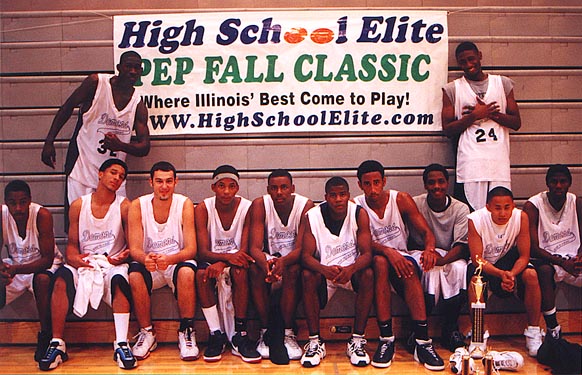 By Frank Rusnak
Concluding with the Chicago Demons being crowned champions of the High School Elite PEP Fall Classic at North Park University it was a successful weekend with top talent from throughout the state on hand.

The main duel came down to the two big men for each team. RBS's Kelly Whitney, a 6'8" senior from Chicago Marshall, against Ricky Cornett, also 6'8", a junior from Homewood Flossmoor Christian Academy. Both teams putting on a show for all the coaches on hand, the Warriors were too much to handle for RBS in the end with their talent and depth.

That depth would turn out to diminish drastically for the Warriors as countless injuries were sustained to several of their players and eventually had to forfeit their final game as everyone could be found on the bench icing their sore muscles and joints.

Perhaps the best one-two combo at the tournament was Manley High School's 6'2" Illinois-bound Luther Head and 6'5" rising prospect, John Jones. Both players averaging 20-plus points for the tournament and Jones amassing an amazing 33 points in one game which finished as a single game high of any player in the tournament, they continually had the attention of fans and college coaches alike when they took the floor. With their high flying acrobatics and oozing skills they eventually brought Manley on to win the Consolation Championship over the West Central Gunners 16-U team.

The Gunners, comprised of Peoria-area players, came into action on a mission to prove to everyone that they could hold their own with the Chicago players. In the end, they proved far beyond that, as they never backed down to anyone and finished with their 17-U team in the championship game. Lead by Peoria Richwood's 6'4" combo guard Steve Turner, the Gunners never were out of a game. Turner finished as the Tournament MVP displaying a consistent outside shot, the ability to handle the point guard position and an unselfish-team mentality.

In the end, it was the Chicago Demons who concurred all and did the unexpected of winning the crown. With their chemistry and team play it was tough to overcome the quick Demons. Championship Game MVP Michael Edwards, a 6'3" fifth year player at Chicago Austin, lead the Demons with a 10.75 points per game average and 16 points in the championship game with some clutch shots.

Holding down the middle for the Demons was 6'6" Joe Sewell from Bolingbrook High School. Others who starred for the Demons were 6'3" senior swingman Phil Watson (Von Steuben H.S.) who displayed his uncanny passing abilities and great athleticism, Von Steuben junior point guards; 6'2" Darnell Rawls and 6'0" Luke Rogers, among others. Overall, it was a great all-around effort by the Demons and all of their players and a well deserved championship.