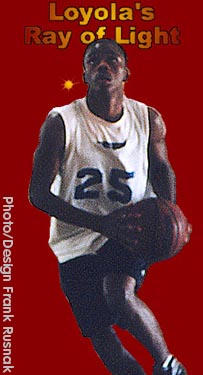 Going from the maroon of Danville to Loyola's marron,
DaJuan Gouard looks to garner immediate playing time with the Ramblers

He received most of his accolades throughout his high school career through football, but in college Danville's DaJuan Gouard will be pursuing his basketball dreams as he committed to play with Loyola of Chicago.

A 6'2" combo guard on the basketball court, Gouard was recognized as a two time all-state performer on the gridiron while starring at wide receiver for the Vikings.

"I really wasn't getting recruited that much in football and my heart is in basketball," said Gouard. "Football was just something that I did because I was good at it and I've been playing ever since I was younger."

While focusing solely on basketball, Gouard looks to shine while at Loyola. Averaging 17 points, 5 rebounds and 4 assists this past season for a Danville team that finished 25-6, he looks to bring his athleticism and quickness to the Ramblers.

"I think I fit in with Loyola really well and they play the same type of style as in high school," Gouard said.

Looking to get most of his time at the two-guard, Gouard has the capability to play the wing, or even spend time at the point guard spot.

"David Bailey (Westinghouse graduate) will probably be getting most of the time at the point, but we will be playing an offense where we could interchange the positions," he said.

Since the basketball season ended, DaJuan has been training vigorously to get into shape for when it's time to pack up and move to the Windy City and show that success on the football field is not the only place where DaJuan can shine.