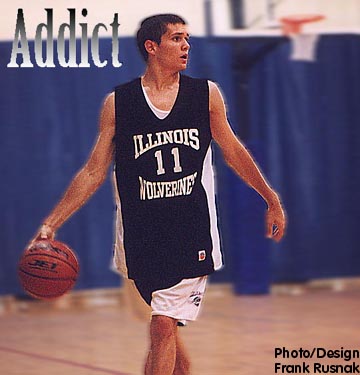 Ala Pistol Pete Maravich, Adam Dauksas sleeps with his
basketball to make it an extension of himself on the court

By Frank Rusnak
By definition, an "addict" is one who devotes or surrenders them self to something habitually or obsessively. With that said, Homewood Flossmoor's Adam Dauksas is addicted to basketball like a chain-smoker is to nicotine.

"I play basketball because I'm addicted to it," admitted Dauksas, a 6'3" point guard. "Ever since I could walk I have been dribbling my basketball--and I've got pictures to prove it. I've slept with my basketball since I was little. I just can't go without a day without touching my ball."

A full-fledged disciple of basketball, Dauksas has had many years of success from his self-proclaimed addiction.

Born in Homewood, the Dauksas family and little Adam--with basketball in hand--packed up and moved to neighboring Flossmoor when Adam was in the second grade. When Adam wasn't shooting on his own or dribbling the ball around the house, he would try to hang around his older brother--by 3 years--Jeff, and participate in games with him and his friends. The youngest and shortest at the time in these pickup games, Adam was always looked down upon. That is, until he started to catch onto basketball a little quicker than expected.

With Adam catching up quickly with Jeff and his friends on the basketball court, he was starting to gain reverence and become accepted.

"They always pushed me around whenever I played with them," said Adam. "But they began to respect me when I was in fourth grade and could hang with the eighth graders--and usually beat them."

Not stopping once he could beat his brother and his friends, Adam was looking to elevate his game to the next level. Although always above average height for his grade, he knew that his place on the basketball court was at the point guard position.

"I love the game and playing point guard because I'm in control and it all slows down for me," said Adam. "It's kind of weird but it just comes natural to me and I don't have to think, I just play."

With all of his training outside of the games, it is no wonder his actions on the court come by instinct.

The 51-year old Condotti was previously the head coach at Chicago Westinghouse for 22 years and is going into his seventh year as headman at Homewood-Flossmoor. His relationship with Adam goes almost as long as his stay at H-F, as the two have been well acquainted with each other since Adam was in sixth grade.

Having attended his summer basketball camp for the past six years, Adam knew that Condotti was the coach he wanted to play for in high school. Attending catholic schools up until eighth grade, Adam transferred to the local public school for his last year of schooling prior to becoming a Viking, which he knew, was his destiny.

"I realized in about sixth grade that I wanted to be Coach Condotti's point guard," said Adam, "and he knew it too, since I had been attending his camps since that time. "We had built a pretty strong relationship before I'd walked in the doors of H-F."

It is not uncommon for the two to be found sitting down in the basketball locker room and watching film of Condotti's Westinghouse teams for hours on end. With so many great players, and point guards in particular, Condotti has a good idea of what makes a topnotch lead guard.

"You've got to have [good] guards to win high school basketball," said Condotti. "As a point guard, Adam has to have a complete understanding of the game and what I'd like him to do out on the floor. He's actually the coach on the floor and I'm confident with the ball in his hands. Adam will have the basketball in his hands 90-percent of the time. When [Adam] knows what I'm going to say before I say it, then we've arrived on the same page. And I think with Adam, we have arrived on the same page."

With a lengthy list of notable alums that Condotti has coached at Westinghouse and Homewood-Flossmoor such as Mark Miller (UIC), Michael Jenkins (Northwestern), Jason King (UIC) and the one that he talks most about, Kiwane Garris (Illinois, NBA, Europe), he has ran into his fair share of talent in his 29 years of coaching.

"He shows me a lot of tape of Kiwane," said Adam. "Of how he played, how he acted and how he ran the team [at Westinghouse]. Playing for Coach Condotti is just a pleasure with how much he shows me. He teaches me on the court things about being a point guard and winning, but off the court things, too. He is one of the best, if not the best coaches, and there is never any reason to talk back to him because whatever he says is always going to help you out."

Needing all the help he can get this year, with the Vikings not having a deep team and playing in the rugged SICA East, they will be hard-pressed to improve on their .500 mark from one year ago.

"If you place any one of the SICA East teams in any other conferences, I bet they'd win it," Adam said. "It's just a war every night."

Adam knows that playing in a conference such as the SICA East can only make him a better player and elevate his game further and hopes that it will help him in his ultimate goal.

"In the end, I'm just looking to get a college scholarship to a good university," Adam said. "Hopefully, after that I will use my brain instead of body to attend Law School and become a lawyer. But that's not for a while. Now, I'm concentrating on my grades--as a member of the National Honor Society--and my jump shot."