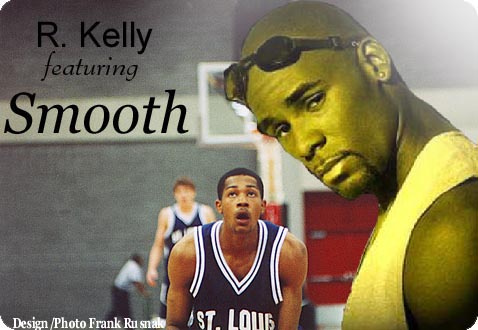 Darius Miles graduating to the NBA, the Southern Illinois Southwestern Conference is without a big time star and a top team to contend for the state championship.

Enter 6'4" Ramone Kelly and his Belleville West Maroons and you have a star in the making with a solid group that returns all five starters. With Darius leaving some acutely big shoes to fill, literally and figuratively (Darius wears a size 19 shoe), Ramone feels up to the challenge.

"Darius brought a lot of exposure down to our part of the state and that helped everyone else out, with everyone wanting to come down and see him play. That kind of put us on the map," said Ramone "Smooth" Kelly.

With large expectations coming Ramone's way this season he is working hard this summer with his AAU team the St. Louis Eagles. In his third year playing with the Eagles he enjoys all the exposure and preparedness that the program has done for him. "They've helped me out a lot, being able to play against top competition all the time." With the AAU season winding down there is a trip to Portland left from August 3-6. Then, he will attend, for a second time, Van Coleman's Future Stars Camp in Iowa and finish up before the high school season at Larry Butler's annual preseason shootout.

Young for his age, he won't turn 17 until September, Ramone has received a lot of recruiting interest from eager colleges. Already putting offers on the table are Duquense (Pittsburgh), Indiana State, SMU (Dallas, Texas), Central Florida and Illinois State.

With an ongoing trend of players committing early Ramone said that he is going to go against the grain. "I don't think I will commit early I would rather like to weigh all my options."

In no rush to commit Ramone said he is planning on taking visits to Indiana State, SMU, Duquense, Southwest Missouri State and possibly Marquette.

Also, showing mild interest in Kelly is Northwestern University proving that he is indeed a fine student. A proud owner of a 3.5 grade point average Kelly works hard in the classroom.

Taking his per game averages of 16 points and 3 rebounds Kelly is excited about the prospects for his team. "It's going to be pretty competitive, East Side (East St. Louis) is always really good and quick and Centralia looked good this summer with a real big team. But I feel we can compete with them all as we should win the conference and hopefully make it down state."

With some big obstacles ahead of him Ramone is ready for all that awaits him with his calm demeanor and smooth game.